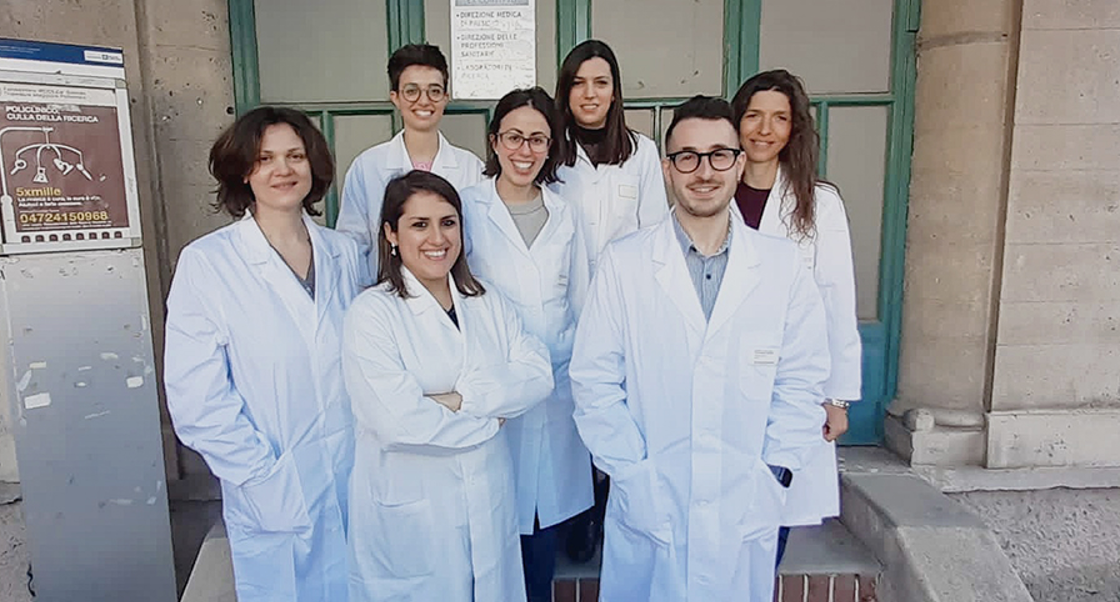 Cariplo Foundation assigned 250.000 € to support this project, under the scientific responsibility of Dr. Federica Rizzo, a young scientist at “Centro Dino Ferrari”, University of Milan.

This is a two-year project started in January 2022 with the contribution of a team of young researchers like Dr. Monica Nizzardo and of an equipe of Neurologists, including Prof. Corti and Prof. Comi working at IRCCS Ca’ Granda Foundation, Ospedale Maggiore Policlinico, Milan.

Spinal muscular atrophy (SMA) is a serious neurodegenerative disorder caused by autosomal recessive mutations in the SMN (Survival Motor Neuron) gene and it is characterized by the death of motor neurons in spinal cord, the neurons that transfer the electrophysiological signals from the Central Nervous System to the muscles, controlling their movement, as a consequence of SMN protein reduction. Type1 SMA, the most severe form of the disease, represents the most common genetic cause of infant mortality; milder forms with a later onset are SMA type 2 and 3. This disease causes progressive weakness, muscle atrophy, deficiency in swallowing and difficulty in breathing mettere link alla pagina della SMA del centro dino ferrari). The approved drugs are focused on increasing the production of SMN, the protein deficient in SMA. However, these types of treatments are completely effective only if administered early on and it has not clear yet whether they are also suitable for less severe forms of SMA. Therefore, there is a need to develop therapies complementary to those that increase SMN levels and that could be effective for SMA patients of all ages and phenotypic profiles.

A better understanding of the molecular mechanisms underlying this complex pathology is needed to improve the therapeutic strategy. The study of the expression profile of cells from patients compared to those of healthy subjects can help to identify non-SMN new therapeutic targets for SMA.

Recently, our group performed a complex analysis of gene expression in induced pluripotent stem cell-derived motor neurons (iPSC) obtained with reprogramming of fibroblasts from SMA patients and healthy subjects. The study allowed us to identify therapeutic targets alternative but complementary to SMN, as putative modifier of the disease ( Rizzo et al., 2019). In particular, we identified interesting molecular changes in Stathmin-2 (STMN2), a gene involved in neurite outgrowth and axonal regeneration. Intriguingly, other groups have observed similar alteration of STMN2 in other neurodegenerative diseases such as Amyotrophic Lateral Sclerosis (Klim et al. 2019; Melamed et al. 2019), supporting a widespread putative molecular and therapeutic role in motor neuron disorders for this gene.

This project aims at investigating the molecular and therapeutic role of STMN2 in SMA to confirm it as SMN-independent molecular target for developing a complementary SMA therapy that combines SMN-independent and SMN-dependent strategies. Both in vitro and in vivo SMA disease models, already established in our Lab, will be used. As in vivo model we will use the SMA mouse model which harbours reduced SMN protein level and develops a phenotype resembling the human disease. As regards the in vitro model, we will exploit our experience in the stem cell field with iPSCs, already successfully generated from SMA patients and unaffected subjects and differentiated into MNs.

We are confident that this project will have a significant impact on the neuroscience field by providing better knowledge on SMA disease pathogenesis, with the possibility of identifying new molecular targets complementary to the existing ones and of developing novel therapeutic approaches for SMA.

The project will be developed as follows:

AIM 1: Study of STMN2 role in SMA pathogenesis
We will study stathmin 2 alterations in our in vitro and in vivo models of SMA trying to understand whether these alterations correlate with the deficiency of the SMN protein. 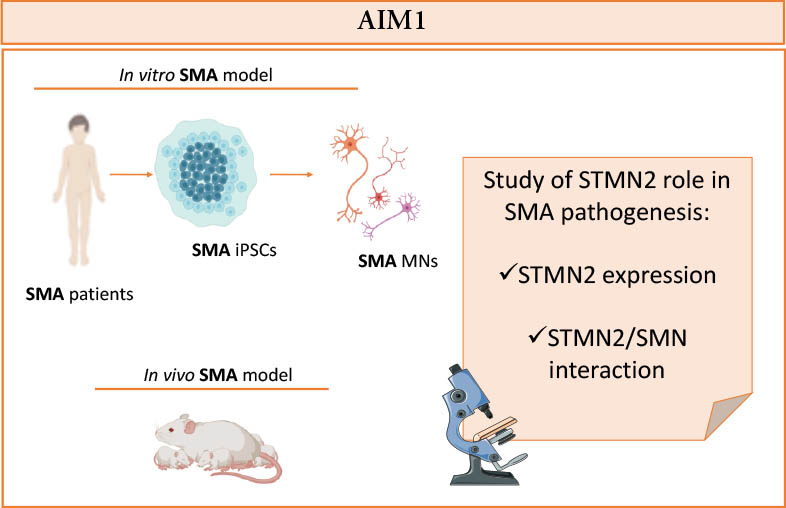 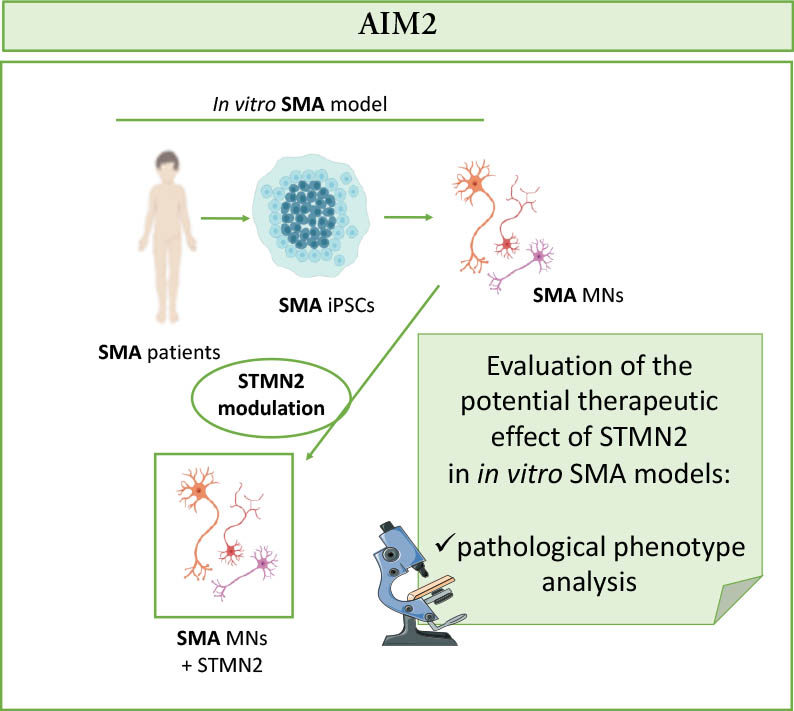 AIM3. Evaluation of the potential therapeutic effect of STMN2 in in vivo SMA model
We will evaluate the effect of Stathmin 2 upregulation in vivo in SMA mouse model monitoring the modulation of the pathological phenotype in SMA mice treated in the pre-symptomatic stage. 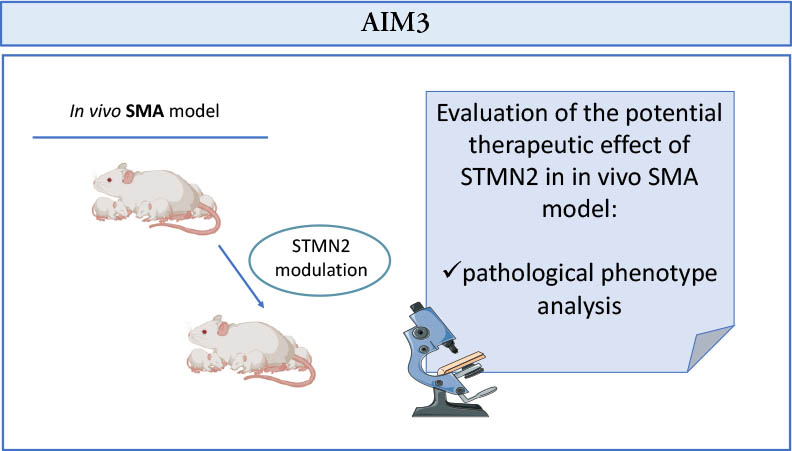 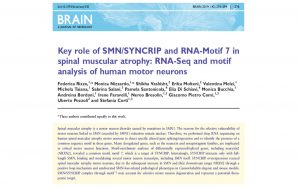 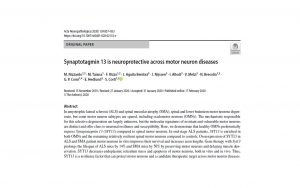 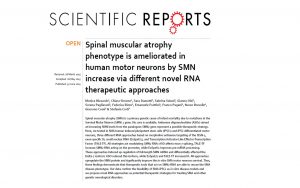 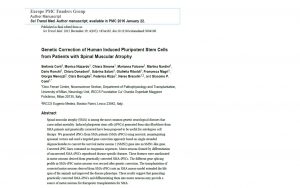